Char: Before venturing solo to the movies last night, Bek and I had a conversation that went something like this:

Char: I know. But I like seeing Matt Damon hurting people.

Char: So, I wasn’t expecting much. And that’s what I got. Jason Bourne is the latest outing in the Bourne franchise, directed by someone called Greengrass (who also directed the second and third Bourne films). It’s got Matt Damon (which we have to say since the last one had JRen), Julia Stiles (for a little while), Tommy Lee Jones and a woman who suspiciously resembles the evil pharaoh from Stargate.

Char: Apart from this new character, all the actors look suitably aged, which I like. It’s nice seeing the wrinkles on screen, even if they don’t extend past Matt Damon’s chin …

… except where it means Tommy Lee Jones as the Director is channelling the emperor from Star Wars. 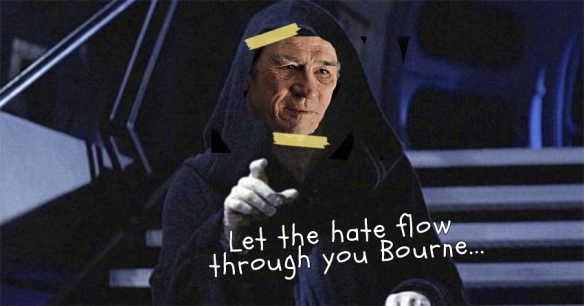 Char: I thought it was a lazy film outing. The first half is flat and dull. There’s a cool chase scene, but I smelt the whiff of the second Bourne film and thought, they’re going to kill Nicky. I know they are. AND THEY DO. Now, Nicky’s character is one of the most enigmatic in the whole franchise.

Bek: Humph. Like the latest James Bond movie, they cast aside the age-appropriate awesome actress in favour of someone young with thighs like a baby giraffes neck.

Char: Uh, YEAH. I’ve always been curious about Nicki – she has some skills, and yet we never get really anything about her. AND NOW SHE’S DEAD. And because they never allowed any romantic tension to develop between her and Bourne (except for that throwaway line in one of the earlier ones) her death really means little. She’s a device to bring Bourne back. AGAIN.

Char: Yeah. Ho hum. Yawn. Even the intriguing power woman character of Heather Lee (Alicia Vikander) couldn’t quite save that.

Bek: Argh. Intriguing? Are you kidding me? The only thing intriguing about her was the question of someone who was supposed to be so smart, why is she wearing a giant 90s banana hair clip? TELL ME WHY.

Char: Oh yes. That fracking banana clip. I did spend a while wondering if they put it in just to give her a ‘thing’. You know, to stand in place of a personality. She was a pretty unreadable book. But, in the desert landscape that it was, I did find it intriguing that a young woman character is swinging with the big power dicks, and is shady, and you’re never sure whether she believes what she says or is just playing anyone.

Char: But, enough of that. Where the film really got interesting is right around the half-way point where the ‘Asset’ (Vincent Cassel) starts going rogue, opening up a splinter in the CIA.

Bek: I lost interest when it became apparent he wasn’t taking his shirt off.

Char: Touché. It wasn’t until then that we really had a villain, and could open up the full throttle on hating Tommy Lee. But it’s all really haphazard and half-finished. The thread with the social network Deep Dream security bizzo is just kinda hanging out there awkwardly at the edges like a nutscape**. Why is Bourne bare knuckle fighting? Does he need money? DID MATT DAMON NEED MONEY?

Char: Even Heather Lee, who is the most interesting character with the constant questioning of whose side she’s on—

Char: —ends up getting a pat ending.

Bek: I felt no emotional beats in this movie. Bourne discovers the real reason why his father was killed, but I don’t know enough about their relationship to care.

Char: Yeah, Bourne’s face is just a mask of I’m-dead-inside. I mean, even Daniel Craig’s Bond managed a kind of crazy-eye emoting in Casino Royale. Then there’s the stupid, stupid dialogue (“There’s a phone in the room. I can use it to delete the files”)—

Char: —the convenient airbags (the Asset’s car crashes in the first chase, deploying said bags, but Bourne’s car goes through a demolition derby in Vegas with none in sight).

The one really interesting thing is that Bourne comes to his full arc, recognising that if he truly regrets the things he’s done, he can’t kill Tommy Lee. So Heather Lee does it—

Char: —And then they kinda ruin that insight by having him kill the Asset with his bare hands. WHAT?

Bek: And you just can’t kill that magnificent French man!!

Char: Mmmmm. He’s definitely got some of that grey fox going on. Anyway, despite the appeal of Bourne hurting people, the film ended up so, so dissatisfying. Maybe because Bourne has become such a bleak and tragic character. I think the second Bourne was so powerful because it dared emotional investment – Bourne had had a shot at normality and it had been snatched away. Now there’s nothing. He’s still got his wiles, but honestly, the man’s deserved that to mean something. This movie needed a big adrenaline needle of emotion and investment. Clear!