Char: So MMXXL was a bit like my first manuscript – weird, uneven, and in need of a good edit. But! It was also a shiny diamond amongst all those rough dialogue scenes, and like the first one, weirdly (dare I say) feminist. I don’t know if I should say such things.

Bek: There sure are a lot of interesting reviews out there, pointing out the feminist angle and that’s kind of amazing for a film about a group of men. Directed by Gregory Jacobs, this is basically a road movie starring male entertainers who like to talk about their issues (entrepreneurial frustrations) and are secure in their sexuality (drag-queen vogue-off!). Now, I’ve read a lot about the feminist angle of this movie, which is all very interesting. But something else struck me: the movie is totally body positive. The bigger sized women weren’t being laughed at. Some were used as pommel-horses, sure, but so were the regular sized women and hey, who wouldn’t bend over for Channing Tatum. Um… you know what I mean. 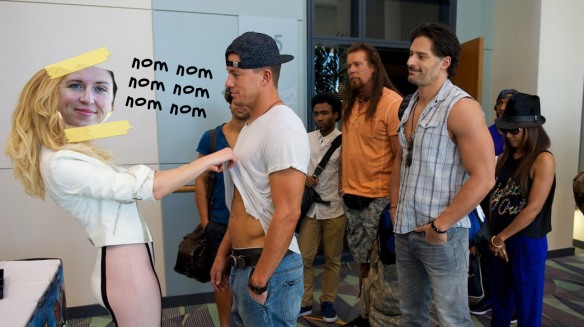 Char: Good point. It was all about the ladies, really, and feeling sexy because you know what you like, not because you’re size whatever.

Bek: Yeah. Curvy chicks rule. Because we all know the health dangers associated with thigh gaps: they’re bad for your balance and your pussy gets cold. 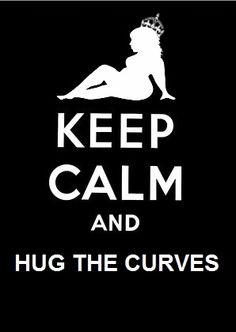 Char: And let’s face it, what I want is Joe Man-I-Mean-Hello! who asks about my fantasy, which is clearly watching him S&M strip-tease to NIN’s Closer. Well-read, sir!

Bek: I’d say this movie is a cure for anyone who saw the Entourage movie. Or Mel Gibson in What Women Want. In Magic Mike XXL, the men discuss how women just want to be listened to, how they deserve to have the bedroom light on when their husband makes love to them. The men call the women in this movie ‘queens’ and ‘goddesses’. And there is sweet, sweet poetry.

Char: Yeah, though that was the bit I think should have been on the editing room floor. Waaay off track at that point.

Bek: And then there was Joe Manganiello humping a fridge of bottled water to make a bored cashier smile.

Char: True. All is forgiven then. Andie McDowell would certainly agree with me, after all, she gets the Joe. Another random road-trip scene that oddly worked.

Bek: I mean, sure, the narrative was a little loose, but I had to cross my legs a few times as I laughed and laughed. This movie treated people of different shapes, sizes and colour as they should be, like regular people, and not a punch line because they look a little different from the Hollywood norm.

Char: And when they’re high on Molly (I had to look it up – basically ecstasy, I think) and behaving like teenagers? I totally bought it. And having said all those positive things about the portrayal of women, I did like how Tates and gang were given additional dimensions. They’re not just strippers, ladies, they’re real people, too. Tates gets a history, and that tiny bit with Tarzan? The glimpse of vulnerability? That was—okay, wait, stop. It’s not going to win an Oscar, but you get the point. 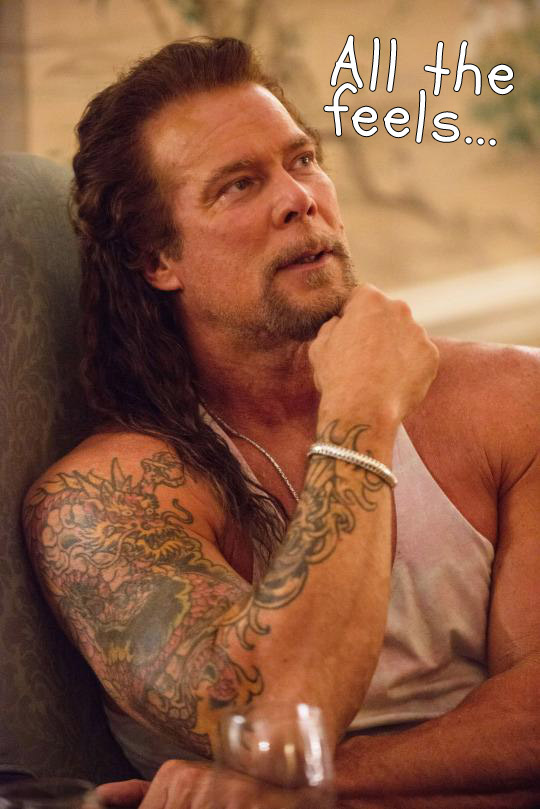 Char: Overall, it feels like a respectful sequel, and I’d go so far as to say it’s a truly ensemble cast – Channing isn’t the only thing going on. They neatly cut out Tates’ fiancé and McConaughey’s characters from the first movie in practically one-liners at the start (code: there’s no movie if Tates is a douche, and we can’t afford McConaughey).

Bek: I thought Jada Pinkett’s character kind of filled the ‘over-the-top’, dangerous, wicked (-ly awesome) shoes that McConaughey left behind. Even though she wasn’t really playing the villain, just someone not to be trifled with (girl crush alert!).

Char: Yes! I spent a long time trying to work out what her job was, but, whatever, I want her house! Also, while we’re on the sets, I have to say that Tates’ workshop is very dimly lit at the start. How he gets any work done in there at night, I don’t know. But full credit for the bench grinding. Get it? Get it?