Cress has been in love with Quin since she was a girl. But he thinks of her as a little sister. And now they’re going to live together…

‘Were you scared when you came to Sydney? You were a few years younger than me, and you didn’t have anyone to come to.’ She was being nosy, but knowing Quin, he’d tell her if she overstepped, or he’d ignore her if he didn’t want to answer.

‘I think I was too young and too excited to think about it.’ The car seemed to slow a little as he flicked her another glance. The traffic was slowing for the lights ahead. Cress hadn’t seen them at first glance. There were so many lights and signs and sights, it was a little bedazzling.

‘Aren’t you excited?’ he asked.

‘I haven’t really had the time to get too excited. I got off the header late yesterday, on the train today. Tomorrow I’ve got a team meeting and I’m sure I’ll start getting excited then.’

His eyebrows lifted but before he could turn his head, the lights changed and they were moving again. ‘Weren’t you excited when you signed that contract?’

She chewed her bottom lip and tried to remember how she felt. ‘It came on email, Quin. It wasn’t any big deal. Not like you with the agent coming to school and all the media you got.’

He stiffened for a moment and then said, ‘The contract came on email? Did you get an agent to negotiate it?’

Cress laughed. ‘There was no point. It was a flat offer across the board, take it or leave it, except for a few who went in the draft.’

He shook his head. ‘No agent? That’s crazy?’

She fought back a grin. ‘You don’t have a clue how much money I’m earning, do you?’

‘Total for what?’ Quin didn’t seem to have any idea at all. He was genuinely puzzled, she could tell by that deep crinkling near his eye and the tugging of his jaw.

‘Total for the season. It’s only eight games. A short season. Kind of an experiment.’

While she spoke, his jaw dropped further and further. Then he snapped it shut, slid a look at her, before his jaw bunched tight. ‘You’re okay with this?’

Cress laughed. ‘Well …’ She’d explained this a lot but it was a bit difficult to explain it to someone who was her male counterpart. ‘Women’s sport has to start somewhere. I’m stoked that they’re recognising us and giving us a competition. I understand that they’re not sure how it’ll go, so they can’t offer big contracts.’ She took a breath. If it wasn’t someone who was like a brother, she wouldn’t add this bit. ‘But yeah, it was a bit like a slap in the face, paying us that. I don’t know why they offered us anything, really. I would have played for nicks.’

Quin swallowed and it was a pretty loud one. ‘I’m sorry. I thought Tris would have told you why I had to ask to stay with you. I wasn’t sure I’d be able to find work to fit in around football, which meant I wasn’t sure I could afford to rent.’

He held up his hand. ‘There’s no rent. No problem, Watercress.’

‘You got a job?’ He sounded incredulous.

‘I’m a pretty capable chick, Mr Fitzpatrick. Did you doubt my ability to be employed?’ She tried so hard to make it funny, but she could hear the defensiveness. She hoped Quin wouldn’t hear it.

‘No. It’s just …’ He hummed. ‘I … geez … I thought you might want to climb the bridge?’ His question quite swept the air from her lungs.

‘I thought we could do it this week.’

‘A weekday?’ Cress shook her head. ‘I’ll probably be working. I’ve got to fit that in around training.’

‘Oh. Will you have the weekends free?’

‘I think we train some Saturday mornings. Not sure if they’re scheduling trial games or not. I guess I’ll find out tomorrow.’

Then Quin said, ‘Do you need to work?’

Cress snorted. ‘Pretty much. I don’t want Dad footing the bill. I want to try to make this work. They reckon I can fit the work around footy commitments.’

‘What are you doing?’

‘Labour for a landscaper. It’s local.’

‘I was hoping you’d see the sights with me.’ There was just a tiny bit of a young boy’s plea in his tone that made her heart soften.

Quin’s head shook, then was still, then shook again. If she had to guess, she’d say he was having a great conversation with himself and answering himself in the negative all the time.

‘It’s going to work, Quin. I feel it in my soul. I can juggle farm and footy, been doing that for years, so this’ll be just the same. Don’t stress. If I can still manage to get to the Royal to catch up with people, I’m sure I’ll fit in a few trips with you.’ She leaned over and squeezed his forearm. ‘I’ll let you know tomorrow night what my schedule is and we’ll fit in the Bridge Climb. There’s no way I’m coming to Sydney for months and not getting on that thing.’

That, or it’d burn her completely.

PRE-ORDER NOW and tune-in this week for more from Catherine Evans! 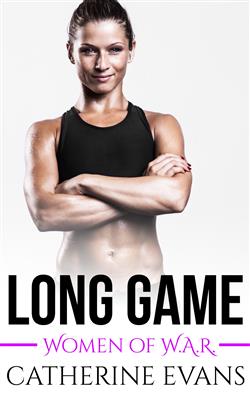 Does she dare pursue all her dreams?

Quin Fitzpatrick left Grong Grong as an eighteen-year-old to play Aussie Rules in Sydney, but after eight years the shine has gone from the lifestyle. When his best friend’s little sister follows in his country-to-city footsteps, he promises to look after her. She can stay with him and he’ll protect her as best he can. Besides, Watercress is the little sister he never had.

But Cress is all grown up now and playing Women’s Aussie Rules, and it’s about time that Quin sees her as a woman too…