For me, Christmas conjures up images of Santa, decorated trees, sparkling lights, and much-loved carols. Like any other kid, it was my favourite time of year.

The morning involved opening presents––which may or may not have had peek holes ripped into them beforehand!––followed by a visit to church. Part of the church celebrations included a play and singing performance by the children.

One year, the organisers decided to hold a retelling of the nativity story. Being identical triplets, my sisters and I were stereotypically cast as the “three wise men”. 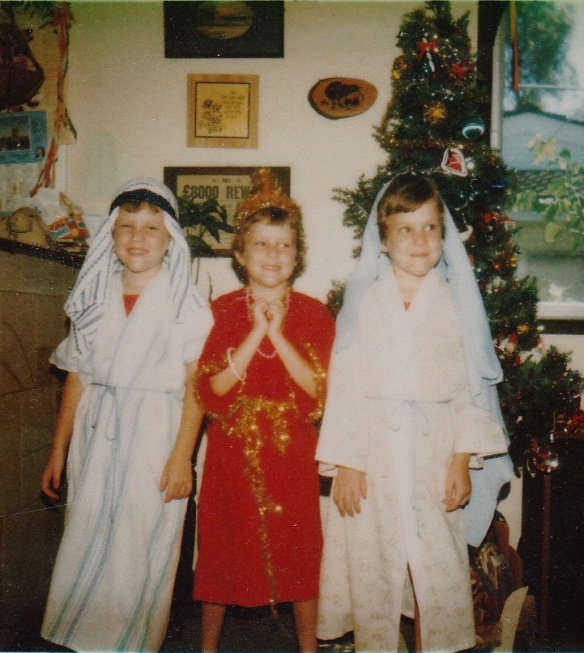 Nobody seemed to mind that we were little girls. Or the fact that the magi probably weren’t siblings!

One of the plays accompanying carols was “We Three Kings of Orient Are”. The children practised it so much that it lodged in my brain and became a favourite. Whenever I see this photo (I am in the middle), I am reminded of that day and that song.

As you can see, I insisted on a decent dose of bling for my costume, whereas my sisters went with a look that was probably more historically accurate! I can no longer remember what gift I bestowed upon baby (aka plastic doll) Jesus, but I think I look smashing in my cardboard crown, pink plastic jewellery, red sheet *ahem* I mean ‘robe’, and gold tinsel belt. Don’t you?

I love this version of the carol performed by The Mediaeval Baebes:

They’re beautiful, accomplished, and they have identical interests…

In their spare time, identical triplets the Farris sisters work together to solve cold cases. Lizzie uses her skills as a Criminal Profiler, Nina her Scenes of Crime Officer experience, and Carrie assists through her work as a both a Forensic Scientist and Forensic Anthropologist.

Romantic and idealistic, Lizzie is picky about men. But despite the good-natured teasing of her sisters, she refuses to settle for anything less than ‘The One’. She loves her life, her job as both a profiler and a university lecturer, and her sisters, and won’t make changes for anything less. If that makes her unrealistic, then so be it.

Gabe Montcoeur has just moved across Australia from Perth to Cairns and starts a job as a journalism teacher at Cairns University: the same university where Elizabeth Farris works. On the surface, the move seems innocent, but he has an ulterior motive. Gabe wants to elicit the aid of the Farris sisters in solving the murder of his family members, and the only way to circumvent their notorious ‘no contact’ policy is to reach out to them in person.

But when Gabe meets Lizzie for the first time, the attraction is instantaneous — and mutual. The deeper they fall into each other, however, the more guilty Gabe feels about his real motivation for getting close. Lizzie wants the real deal, the one, true love — can Gabe ever offer her the future she deserves if he keeps holding on so tightly to the past?