On March 22, By The Sword hits the shelves of Escape Publishing, as the first in a three book series called The Guardians of the Crown, spanning the years 1650-1660.

This is not one of your better known periods of history, but it is a period of history I am passionate about – should I say passionate about. It spans the twenty years known as “The English Civil War and Interregnum” from 1642 to the execution of Charles I in 1649. The period from 1649 to the Restoration of Charles II in 1660 is properly called the “Interregnum” (translated as “between Kings”), although it is generally lumped in with the English Civil War period.

Perhaps it is best described in the romantic parlance of cavaliers and roundheads. The dashing cavalier with his long curls and wide brimmed beaver hat, and the sour faced round head with his cropped hair and puritan collar. In the 1930s a little book came out with a potted history of England called 1066 And All That in which the cavaliers are described a “wrong but wromantic” and the roundheads as “right but repulsive” which kind of sums it up! 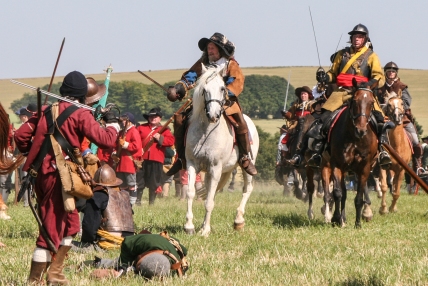 My own love affair with the Roundheads and Cavaliers began when I was probably no more than about 8 or 9. My darling father would read to us every Sunday afternoon and one such book he chose was Daphne Du Maurier’s The King’s General, the story of an ill fated (and fictional) love affair between Sir Richard Grenville and his crippled mistress Honour. The struggle between King and Parliament, laced with romance and skeletons in secret tunnels had me in a thrall. I was lost!

So here are five reasons why I, personally, love this period….

So, if you are bored with regencies, medieval and blokes in kilts, try a dashing cavalier such as Jonathan Thornton the hero of By The Sword. Later in the year, one of Jonathan’s friends and comrades at the Battle of Worcester, Kit Lovell, has his own story in The King’s Man and rounding off the GUARDIANS OF THE CROWN series with the Restoration of the King, will be Kit’s brother, Daniel in Exile’s Return.

And if you’ve got a minute, check out the trailer!

What is the period of history you are most passionate about and what kicked off that passion?

(By the Sword is available for pre-order now. Please note, this is a digital book)

From award-winning author Alison Stuart comes a stirring historical trilogy about soldiers, spies, and the strong women that love them.

England 1650. In the aftermath of the execution of the King, England totters once more on the brink of civil war. The country will be divided and lives lost as Charles II makes a last bid to regain his throne.

Kate Ashley finds her loyalty to the Parliamentary cause tested when she inherits responsibility for the estate of the Royalist Thornton family. To protect the people she cares about, she will need all her wits to restore its fortunes and fend off the ever-present threat of greedy neighbours.

Jonathan Thornton, exiled and hunted for his loyalty to the King’s cause now returns to England to garner support for the cause of the young King. Haunted by the demons of his past, Jonathan risks death at every turn and brings danger to those who love him. Finding Kate in his family home, he sees in her the hope for his future, and a chance at a life he doesn’t deserve.

In the aftermath of the Battle of Worcester, Jonathan must face his nemesis, and in turn, learn the secret that will change his life forever. But love is fragile in the face of history, and their lives are manipulated by events out of their control. What hope can one soldier and one woman hold in times like these?