(re-blogged from AusRomToday – have you entered their fabulous competition yet?)

Tell us a little more about your housewife, Jorja:
Jorja moved to Australia from Sweden when she was six. Her parents divorced when she was nine, her father leaving her mother and baby sister for a younger woman (a physiotherapist from Byron Bay who was the antithesis of her mum). Her mother committed suicide when her ex-husband married the younger woman on the beach a year later. Jorja and her sister were separated and sent to foster homes. At the age of eighteen, Jorja successfully gained legal guardianship of her sister (who was eleven at the time) and raised her on her own until her sister left to study art in Rome. At the age of 25, Jorja enrolled at university as a “mature student” to study international law where she met Mud who, at the time, was an up-and-coming league player just tapped by the Australian team to join their ranks.

Jorja is blunt and almost without filter or tact, but her heart is always in the right place even if it appears she is conceited and condescending. She keeps her true emotions checked, believing to show them is to make her vulnerable. She is incredibly protective of her boyfriend who she loves deeply, and is scathing of anyone who just passes him off as a dumb sports star. She is also protective of her closest friends and will not pull punches if she feels they are being wronged or betrayed in any way.

What inspired Jorja’s story:
The idea of a rugby league WAG being more than just a pretty face and a hot body. I wanted to show how a relationship with a man whose life depends on violence and testosterone-overload could be utterly sweet as well. What kind of woman would be in that relationship? How would she temper a man like that? It was, for me, an interesting investigation into the stereotypical gender roles presented by the media.

What was your biggest challenge in writing Jorja’s story?
Promise not to laugh? My hero is the captain of the Australian rugby league team, right? I am not a rugby league fan. Not at all. But because I am me, I researched my hero’s profession and lifestyle before I began writing. Which meant I watched quite a few games of the NRL on the telly. Suffice to say…I’m still not a fan.

Why will we love Jorja?
She calls a spade a spade, she’s blunt and – at times – comes across as aloof and smug…BUT, she loves her man with a passion that is fathomless and her loyalties to those she cares for is not only fierce, but unbreakable.

The Housewives of Sydney series promises that we’ll “find out what goes on behind the doors of the most exclusive addresses in the country”. What was the appeal of joining this series? Similarly, what has been the biggest challenge?
The appeal? Oh, letting my mind run amuck as I imagined myself living in that world. The biggest challenge? Trying to imagine myself in that kind of world (She types as she sits in a postage-size room wearing her best Bonds singlet bought on sale from Big W for $2, and her Big W shorts also bought for $2. Hee hee hee) 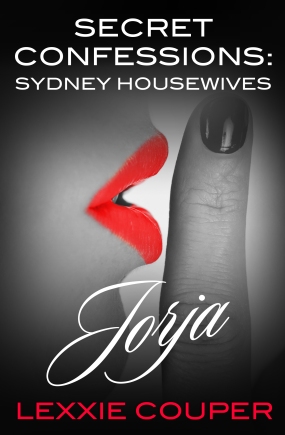 Meet the Housewives of Sydney. They are wealthy, elegant, poised, and constantly in the public eye. But what goes on behind closed doors, in the private homes and parties where the cameras and paparazzi aren’t welcome? Delve into the most personal details of their relationships, their friendships and their lives. The only question is: can you handle the heat?

Rugged, athletic, and absolutely enormous, Mud is aggressive on the rugby field and off. It takes a special kind of woman to tame the beast and take on all that man, but Jorja has never been anything less than exceptional.

But something is going on inside her warrior man, something that she can’t see or reach or touch. She has always been the one able to get through and bring him down, so why does she feel like everything is slipping away?